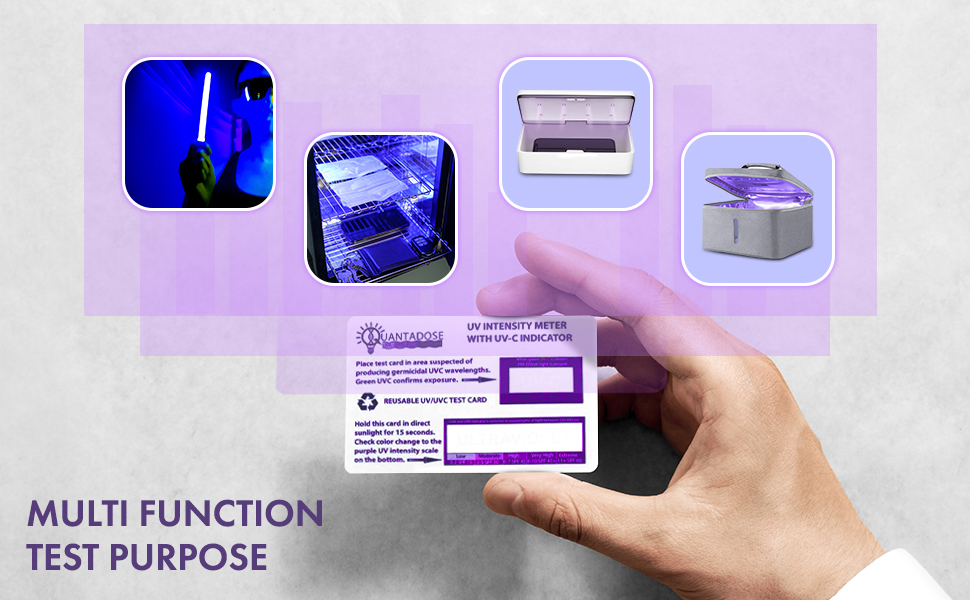 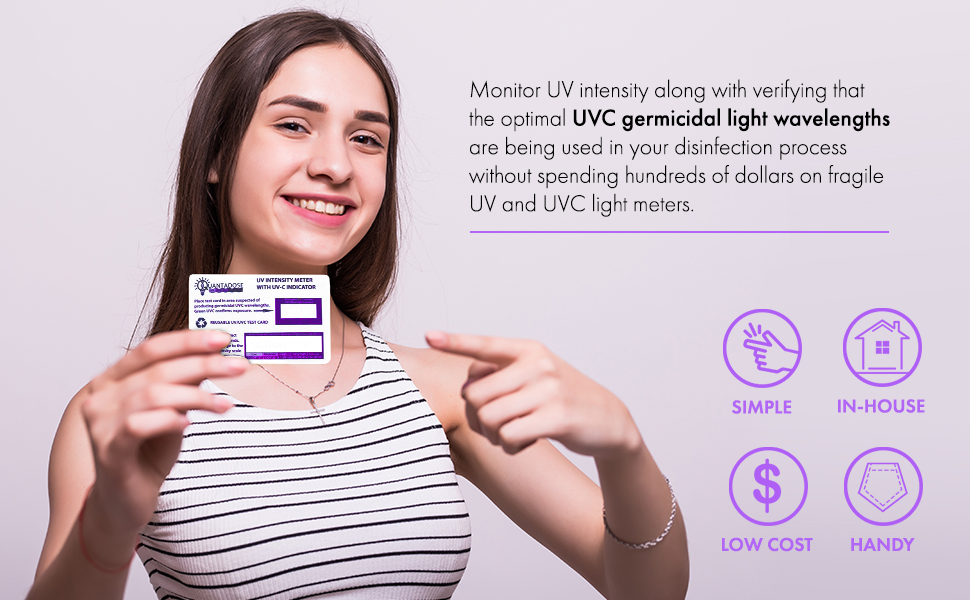 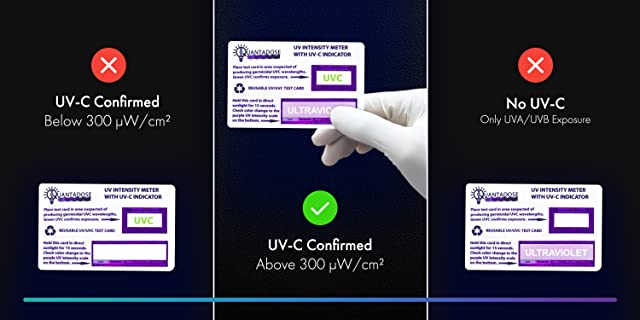 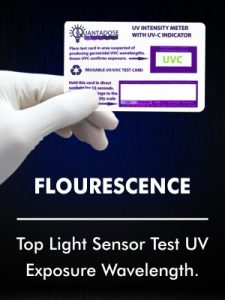 QuantaDose UVC test cards are a basic, reliable, low cost, simple, in-house, and right out of your pocket method of monitoring UVC intensity along with verifying that the optimal UVC light wavelengths are being used in your disinfection process without spending hundreds of dollars on fragile UV and UVC light meters.

QuantaDose provides you with real-time results super fast.  When exposed to optimal UVC germicidal wavelengths, the QuantaDose UVC test card undergoes an instant color change to green where fluorescence is directly related to the energy value received. Fluorescence stops when excited electrons release all photos within nanoseconds after exposure.

QuantaDose has created a specially formulated ink that is sensitive to only optimal UVC which will not fluoresce to visible light or UVA and UVB. This ensures only wavelengths between 250-275nm are shown in glow green.  QuantaDose gives you verification/validation purposes to avoid an increasing number of defective UVC light products on the market today.

These easy-to-use, credit card sized UVC Indicators will increase the efficiency of the UVC light disinfection processes by helping you visualize what is most effective. The amount of inactivation is directly proportional to the UVC dose, which is received, and this in turn is the result of its intensity and duration of exposure.  The farther away the light source, the less UVC will reach the target, so only a quarter of the UVC remains when the distance doubles. 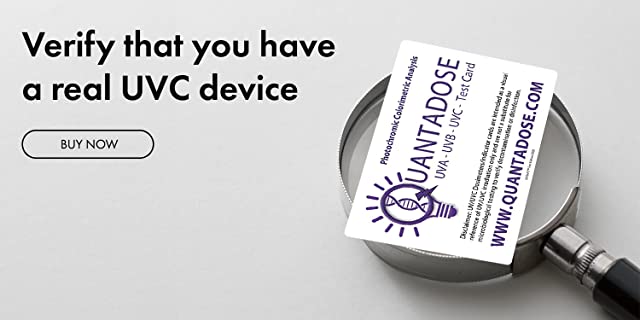 STEP 2) Bottom Light Sensor Test Intensity of UV Exposure: When exposed to confirmed UVC wavelengths, the QuantaDose test card first displays the word “ULTRAVIOLET ” at approximately 300 µW/cm² a gradual color change is directly related to the energy value received. Temporary photochromic dosimeter color is used to check intensity after exposure and should be checked immediately after exposure for the most accurate intensity results. The test is completed in 15 secs, remove the card from the source! 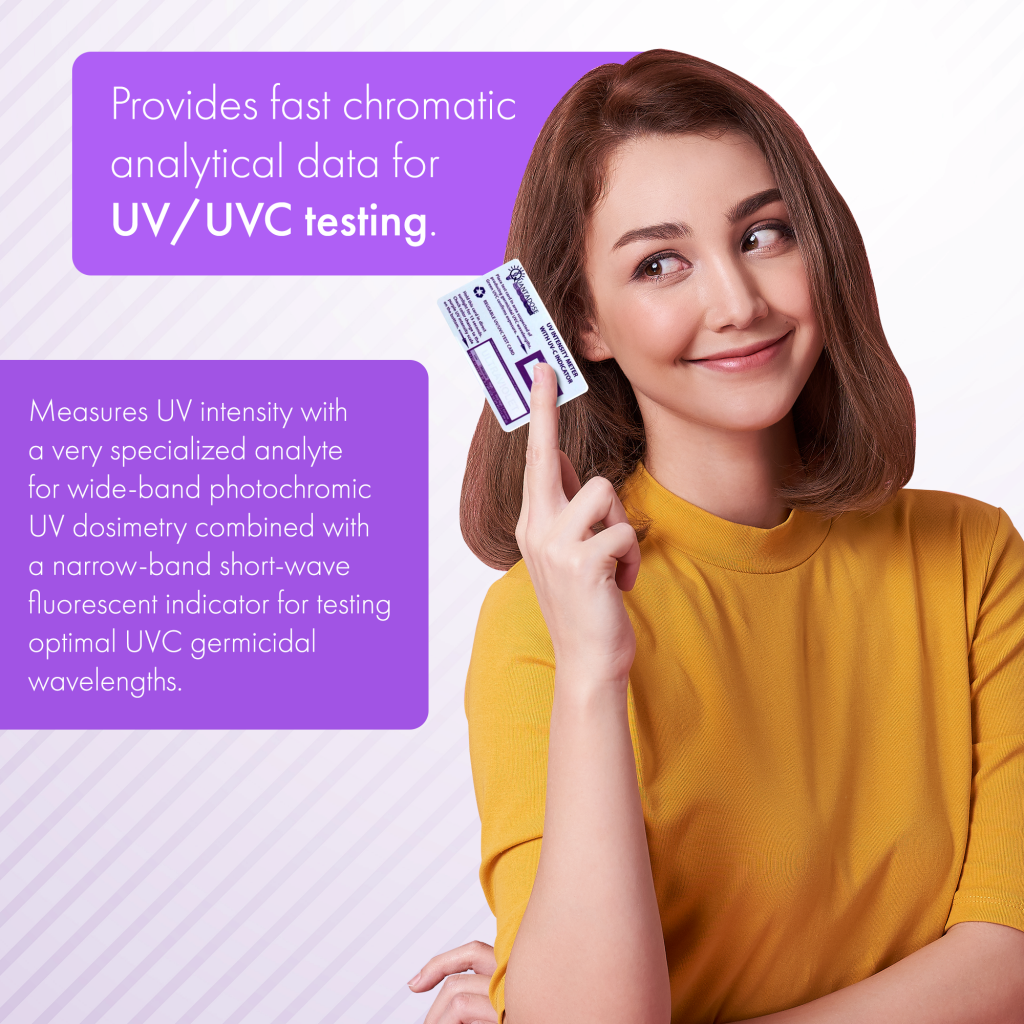 REQUIRED FDA NOTICE: Photochromic material used for UVC intensity testing should never be used to decide when to apply sunscreen to prevent a medical condition (sunburn) which requires classification as a medical device.  Please consult your doctor for advice on sunscreen if you have questions about the UV intensity from the sun measured on your QuantaDose card.  QuantaDose is not intended to be used as a medical device and should never assist you in when to apply sunscreen.  QuantaDose photochromic material used has hundreds of off label uses, from detecting UV from the sun, UV science projects, testing sunglasses, but most importantly what QuantaDose WAS created for — to be a consumers front-line defense tool to ensure they use real UVC over the fake UVC products flooding the market today!  QuantaDose is a very versatile UVC test card with a wide-band photochromic test area that provides lots of useful information about these potentially harmful invisible rays of ultraviolet light.  The QuantaDose UVC test card has only one intended use, this is a two-part UVC test to verify UVC wavelength and easily visualize a minimum intensity of UVC power in seconds.

Find awesome listings near you!