Challenges Elon Musk As The Leader In Anti-Apocalypse Technology

All Quanta X Technology™ innovations exhibit a unique interaction with the most industrialized elementary particle in existence, the quantum of light. The quanta of light is known as a photon, which is the quantum of all electromagnetic fields including electromagnetic radiation such as light and radio waves.

Photons are mass-less with an enormous power that humanity must harness safely so that our world may truly prosper. Quanta X engages in photon management solutions across several industry sectors proving that our current understanding of quanta’s potential — does now and will continue to save lives.

Non-ionizing radiation is found in a wide range of consumer products, commercial environments and occupational settings and can pose a considerable health risk to the public when exposure is properly controlled.

Microwave radiation (MW) classified as Radio frequency (RF) is absorbed throughout the body. At high enough intensities RF does cause tissue damage and cancer. Sources of MW radiation include cell phones.

The different visible frequencies of the electromagnetic (EM) spectrum are “seen” by our eyes as different colors. Good lighting is conducive to increased production, and may help prevent incidents related to poor lighting conditions.

Far-UVC has no known human risk!

Know when shield photons and how to safely benefit from quanta’s collective power!

The color deviation can easily be measured for general UV analysis

QuantaDose™ the most versatile UV/UVC test card on the market today. Gauge when the sun’s natural UVA/UVB radiation warrants protection and test that your germicidal UVC lighting performs as advertised. 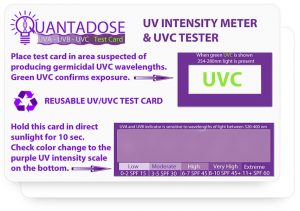 QuantaDose™ is the only UV intensity card meter that distinguishes between the sun’s natural UVA/UVB radiation and man-made sources of germicidal UVC wavelengths simultaneously. 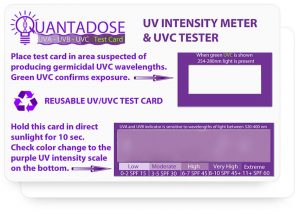 UVA comprises of almost 95% of the light that reaches our skin, UVB makes up the rest. The FDA and World Health Organization have all declared UV radiation a known carcinogen. Natural and artificial sources. 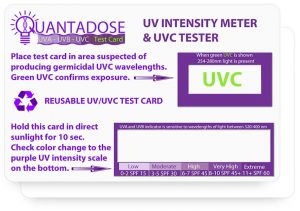 Specially formulated ink chemistry that is sensitive to only UVC will not fluores to visible light or UVA and UVB. This ensures only germicidal wavelengths between 254-280nm are being shown in green.

ALARA – As Low As Reasonably Achievable

The guiding principle of radiation safety is “ALARA”. ALARA stands for “as low as reasonably achievable”. This principle means that even if it is a small dose, if receiving that dose has no direct benefit, you should try your best to avoid it! Three basic protective measures for all radiation safety: time, distance, and shielding.

HOW DOES UVC DESTROY GERMS?

The high energy from short wavelength UVC light is absorbed in the cellular RNA and DNA, damaging nucleic acids and preventing microorganisms from infecting and reproducing. This absorption of UVC energy forms new bonds between nucleotides, creating double bonds or “dimers.” Dimerization of molecules, particularly thymine, is the most common type of damage incurred by UVC light in microorganisms. Formation of thymine dimers in the DNA of bacteria and viruses prevents replication and ability to infect.

ALARA – As Low As Reasonably Achievable

The guiding principle of radiation safety is “ALARA”. ALARA stands for “as low as reasonably achievable”. This principle means that even if it is a small dose, if receiving that dose has no direct benefit, you should try your best to avoid it! Three basic protective measures for all radiation safety: time, distance, and shielding.

Previously this principle was indicative to only ionizing radiation, however peer-reviewed science supports that the thermal and non-thermal dividing line currently used as the basis for safety standards for radio frequency radiation exposures are nothing more than a red herring, a distraction from the public’s understanding of the actual health effects attributed to microwave radio frequency radiation exposure and therefore our ability to protect the public. It increasingly appears invalid to distinguish ionizing from non-ionizing radiation with respect to biological effects that apply to RF Radiation (Cell Phones), UVA/UVB Radiation (Sun Rays) and UVC Radiation (Germicidal Lighting). 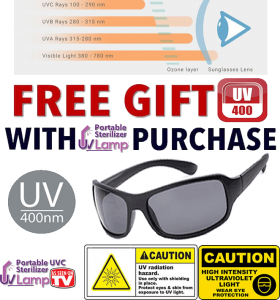 253.7 nm UVC is laboratory-tested for effectiveness when adhering to intensity/exposure guidelines. MULTI-USE – The UVC sanitation process is ideal for cleaning remote controls, computer keyboards, toys, faucets, mobile phones, steering wheels, shopping cart handles, ATMs, airplane and train headrests, music players, and any other objects you can put your fingers on. Reduce the germs and bacteria that are waiting for you in hotel rooms, public restrooms, restaurants, gyms, lobbies, or at work with the UVC Portable Sanitizing Wand.

UVC used in hospital settings is most commonly generated from low-pressure mercury lamps that produce continuous UVC radiation with a peak wavelength of 254 nm. This is why the best portable UVC light wands only use 253.7 nm quartz lamps and never LEDs with longer wavelengths which require longer exposure times.

Using this UVC light technology will not leave residue after treatment, and having a broad spectrum of action and rapid exposure times. The germicidal effects of UVC irradiation results in cellular damage by photohydration, photosplitting, photodimerization, and photocrosslinking, thereby inhibiting cellular replication. Today’s easy to use compact UVC technology allows us to fight the virus outside our bodies! 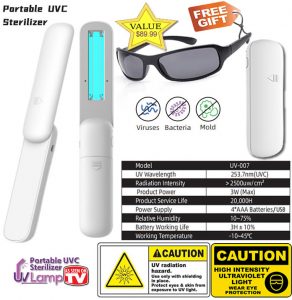 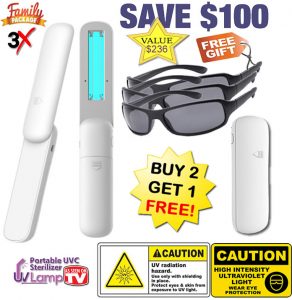 Hospital staff know how important it is to be safe when disinfecting with potentially dangerous UV-C light. NEVER aim light at your skin or eyes! Each UVC light includes UV400 safety glasses for your added protection. 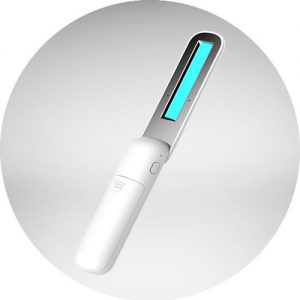 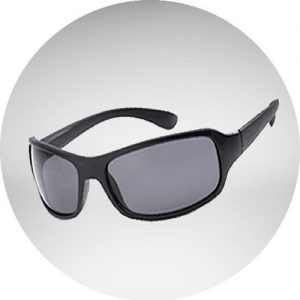 Protects Your Eyes From UVC 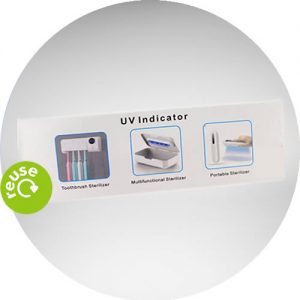 Verifies Your Light Is Germicidal
Buy One
BuY 2 GET 3

Available, get it now online!

Order now!
Change Location
To find awesome listings near you!
Go to Top